Spy cars face the axe from Whitton's and Richmond's roads 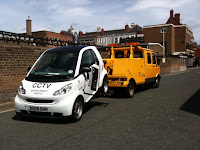 The unpopular CCTV camera cars responsible for incorrectly issuing more than 18,000 penalty charge notices since 2009 are set to be banned from the streets of Richmond upon Thames.

A report due for discussion at next Thursday’s Cabinet meeting will recommend such cars are permanently removed from the streets.

The report also recommends:
·         A 10 minute ‘grace’ period, rather than the current five minutes, for some delivery vehicles to help businesses, when delivery vehicles will be monitored by CEOs before being issued with ticket, if they are wrongly parked.
·         Drivers who return to their wrongly parked cars before a CEO has actually issued a penalty charge notice should be able to drive away without having a ticket served on them.

Lord True, Leader of Richmond Council, said: “These CCTV cars have been a menace to people for years and I for one will be glad to see the back of them. Councils should not be in the business of trap now, talk later. We promised a review into these spy cars, given the importance of our fair parking agenda to bringing life back to our high streets. Many people see them to be an arbitrary and impersonal way of dealing with parking issues. The tactics used create the impression that Councils are interested only in money.

“Assuming my cabinet colleagues vote with me, the cars will not return to our streets. Instead, CEOs will be out and about and will make greater efforts to talk to people, rather than just sitting out of sight in a spy car.

“We have set out to create a climate of fair parking; removing these unhelpful, sneaky cars would be another step closer to achieving the level of trust between the Council and residents which we aspire to.”

Cllr Chris Harrison, the Council’s Cabinet Member for Highways and Street Scene, said: “We have reviewed our operations to be fairer to businesses and residents. We’re proposing to give delivery drivers a few minutes ‘grace’ because we know it’s not always easy to make a drop off. Equally, shoppers who have tried to ‘chance it’ and make a quick stop should not find the long arm of the Council’s parking department chasing them down with tickets without good cause.

“Where people park illegally and dangerously without excuse, we will still deal firmly with them, but our fairer approach means people can go about their daily lives without fear their every move will be watched.”

The two camera cars have been off the streets since the summer, when their use was suspended after it was found the cameras inside them were wrongly licensed. If the Cabinet votes to support the report’s recommendations, they will be removed from the contract which the Council has with parking enforcement provider Vinci Park.

The Cabinet report also makes clear that all CEOs have been re-trained on customer service skills and a fuller programme of training so they can provide a wider range of information, including to tourists, is being planned.
Posted by Gareth Elliott at 02:10