Nominate your footpaths and roads for repair 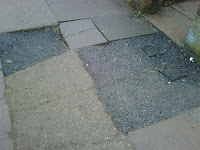 Residents concerned about the state of the footpaths and roads in their local area can now nominate them for repair until the 21 May, thanks to a new £490,000 community fund.

In the All in One survey, residents highlighted the condition of pavements and footpaths among their top concerns. In response, the Council set aside £35,000 for each of the village areas, to pay specifically for community nominated improvements. This is in addition to the very significant annual increase for normal footpath and roadway works, which trebled in the last budget.

Cllr Elliott, Whitton Ward Councillor said: "The state of paving is a recurring issue for Whitton's residents so it is great news to hear that this Council has once again prioritised this issue. I urge all residents to pro-actively nominate their roads and paving where they are in need of repair."

Cllr Chris Harrison, Richmond Council’s Cabinet Member for Highways and Street Scene, said:
“We have set up specific funds for each of our 14 villages which means that repairs can now be decided on at a localised level. The most frequently mentioned suggestions for each area will be evaluated to ensure they are practical and do not form part of planned work. The final decisions will be published in early June.”

Cllr Pamela Fleming, Richmond Council’s Cabinet Member for Community, Business and Culture, said:
“I’m delighted that the nomination process for fund allocation is now open. We understand that good quality roads and pavements are a very important issue for local residents, and we want people to be involved in the decision making process over where the funding goes.”
Residents can submit suggestions by either completing an online form, or collecting a paper copy from their local library. Residents can also suggest other small improvements they would like to make in their area, for example, installing new hanging baskets.

Please find a breakdown of the different repairs and improvements that can be made using the fund:
www.richmond.gov.uk/community_road_and_pavement_fund_-_guidance_notes

For further information or to nominate how the money should be spend in your local area go to: http://www.richmond.gov.uk/fund
Posted by Gareth Elliott at 05:42