Nominate Whitton roads and footpaths in need of repair 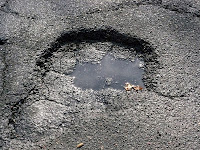 As part of our borough wide consultation, the All in One, residents prioritised roads and footpaths for repair. As a result the Council set aside an annual fund of £490,000 to pay specifically for community-nominated improvements, in addition to normal regular maintenance.

The first tranche of funding received nominations from over 400 residents and roads were improved as a result. The Deputy Leader, Conservative Councillor Geoffrey Samuel, subsequently announced an additional £400,00 extra funding to boost the scheme bringing the total amount for the first round work to £890,000.

The scheme is now open again. Councillor Gareth Elliott, Whitton Ward Councillor, said: “Now is the time to nominate those roads and footpaths that need repair. Let’s ensure that Whitton is at the top of the queue so please log on to the website or fill in the form from the council and nominate your roads and footpaths.”