The 26 most popular roads and pavements schemes nominated for repairs will receive £490k this year under the Council’s ever-popular Community Roads and Pavement fund have been announced.

For the fourth successive year Richmond Council will invest hundreds of thousands of pounds on top of the millions it already spends on repairing roads and pavements across the borough. The latest Community Roads and Pavements nomination exercise ended on February 22 this year and approximately 1,300 residents took part.

Each of the borough’s 14 villages will now receive approximately £35k for roads and pavements repairs.

Last year, thanks to the Community Roads and Pavements Fund, 19 roads and 31 pavements were repaired. This is in addition to the 16 roads and 30 pavements r that were repaired as part of the Council’s regular £3milllion maintenance programme.

“Since nominations closed the Council’s Highways officers have worked hard to inspect the most frequently mentioned roads across the borough and produce cost estimates. I’m very pleased that the Council will now be starting work improving the locations that residents have identified in each village.”

Full list of roads to be repaired under the Community Roads and Pavement budget :

A by-election to elect a councillor to serve Hampton Wick Ward will be held on 2nd July 2015.

The by-election has been called following the resignation of Dr Tania Mathias, after she was elected as an MP for Twickenham Constituency at the recent UK Parliamentary General Election.

A Notice of Election has been published on the Richmond Council website.

For more information, go to: www.richmond.gov.uk/elections_voting_and_registration 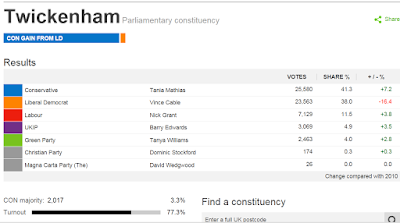 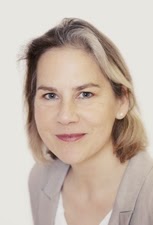 Posted by Gareth Elliott at 20:52 No comments:

Dr Tania Mathias said: "Thank you to Whitton blog for this opportunity.
As a local councillor, and resident in the constituency I am constantly impressed by Whitton.
When the Mayor of London, Boris Johnson, visited Twickenham constituency I invited him to come to Whitton High Street because I told him that it has the best local shops and best businesses in our area and that is down to the local community supporting the High Street.  The investment of the Conservative Council in the High street has made the unique 1930s heritage look even better. After the jewellery shop was burgled this year I was amazed at the public support and kindness shown to the staff by the local community of Whitton.
Last year, together with the local Conservative councillor Gareth Elliott, I asked the then Transport Minister Stephen Hammond MP to allocate funds to improve Whitton station access and refurbishment and I am glad that this is happening.
As a councillor and NHS doctor I have visited Homelink to see its best practice of day care for older residents and I have campaigned for this to be the standard in the borough. Homelink also have the best fundraising events I have been to.
Twickenham Academy now has a sixth form thanks to the Conservative Council and I hope that although the Liberal Democrat councillors opposed this, parents and pupils are seeing a change for the good.
If elected as MP I will continue to fight for small businesses, excellence in education and protection of our parks and river areas and I will work with local councillors to see that Whitton gains the legacy from the Rugby World Cup that it deserves."
The full article and additional blog posts about Whitton can be found at the Whitton Blog which can be accessed by clicking here.
Posted by Gareth Elliott at 05:26 No comments: