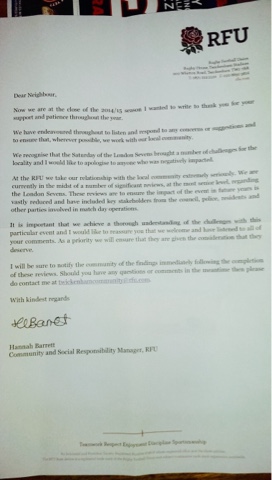 Residents and businesses around Twickenham Stadium can now use online interactive maps to see if they will be eligible for a vehicle access pass during Rugby World Cup2015.

To allow managed access to Twickenham Stadium for the local community and spectators during Rugby World Cup 2015, Richmond Council and Transport for London (TfL) have agreed in principle to a request to temporarily close a section of the A316.  Subject to a final agreement, a section of the road close to the stadium will be closed on the 10 Rugby World Cup 2015 match days and the two England matches in August and September.

The temporary closure will allow Tournament Organisers to operate additional shuttle bus services for fans and to service the Park and Ride facility at Kempton Park.  The closure also permits people walking to and from Twickenham to cross the A316 in larger numbers more easily.

To enable residents and businesses in ‘landlocked’ areas to access their properties during the closure times, the Council and England Rugby 2015will be issuing ‘Vehicle Access Passes’. These will allow local residents to pass through the road closures at specific points.  The roads will be closed from 3 hours prior to kick off, during the match and until 2 hours after.

Residents in the landlocked area are encouraged to check online now that they are eligible for a pass before these are distributed in time for the England v France on 15 August. Each property will be sent one pass automatically. If eligible households or businesses require more than one pass, they can request additional passes online. The passes are not transferable and are not a parking permit.

“The police, the Council, TfL and South West Trains have been working closely together behind the scenes for a long time to make Rugby World Cup 2015 a success. We want visitors to our Borough from around the world to have an enjoyable time. But we recognise that the Tournament will have an impact on our local roads and public transport.

“Temporary closure of the A316 is a major step. The Council has only allowed it to come forward following extensive modelling work by the organisers.  TfL have worked on the options for traffic reduction and have given their assurances that diversion plans for the usual through traffic volumes will be met. The closure plans will be trialled for the two matches in August and modified as necessary.

“We know that the closure will affect a number of residents and businesses in the Stadium area but, with a Vehicle Access Pass, access can be maintained.  Emergency "blue light" access will always be allowed, but any carers needing scheduled access during the closure periods should get in touch with the Council now.”

“With Rugby World Cup 2015 now just 4 months away, I would encourage local residents and businesses to start planning their Tournament. With fans coming from all around the world, we will be implementing a new transport plan on match days, which includes managed access to part of the A316, park and ride schemes and additional bus survives, to cater for their travel requirements. Residents and businesses will have a managed access scheme for anyone impacted by the changes to the A316, so it’s important that they find out if they will need a Vehicle Access Pass.”

To check if you are eligible for an Access Pass, go to

Residents eligible for an Access Pass are reminded that they will still need to display an ‘R Zone’  parking permit.

A series of Community Briefings regarding Rugby World Cup 2015 are being held in June / July. To see the dates, go to: www.richmond.gov.uk/rwc2015_community_impact 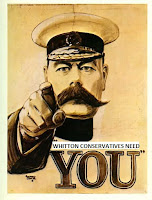 Whitton Conservatives value all the support and assistance we receive and in order to improve our branch we want to hear from you.

Please take five minutes to complete this survey and provide us with feedback to improve and strengthen our local branch.

Click here to complete the survey.
Posted by Gareth Elliott at 06:38 No comments:

Council Officers and Cllr Susan Chappell, Cabinet Member for the Voluntary Sector and Communities, met with key members of the Whitton Community Association last week to make clear that the Council has never had any intention of withdrawing its support for the well-loved local resource.

Following a stream of unhelpful rumours regarding the future of the Association, Cllr Chappell, along with senior Council officers, met with officers of Whitton Community Association to lay their concerns to rest.

Whitton Community Association has occupied their current building for 40 years and is one of a few community organisations locally who have historically not paid rent to the Council, in effect receiving a subsidy for their rent.

Last month, it was reported in the local press that the Council would be withdrawing its funding from the Centre, thereby putting its future into doubt. However, this is completely untrue.

In 2011 the Council carried out a review of rent subsidies and agreed a new policy that would aim to provide a level playing field for funding of all voluntary sector organisations, rationalising historic rent subsidy arrangements.  Now, the Council is working with voluntary sector organisations like Whitton Community Association to agree the services they will provide on behalf of the Council and for what price.  The amount the Council will pay will cover the costs of their accommodation.  This change means that their overall level of funding will not change, only the mechanism by which they are funded.

“I understand that this has been an unsettling time for the Whitton Community Association. There have been many rumours, casting doubt into their future. However, I will say this categorically, to put an end to these completely unfounded rumours once and for all. We are not cutting any funding at all for this well-loved service. It will not be closing and it has never been under threat. In fact, we are working more closely with the Association to see how we can deliver even more local services to ensure their long term future.”

“Great news all round.  The Whitton Community Association remains a much valued part of the community and the issues surrounding the changes to our rent agreement have been resolved.   We are also in the process of renewing our lease on the Community Centre for a further 15 years.

“Small changes will need to be made with regard to the changeover from rent subsidy to commissioning but overall it will be business as usual.”

“It is reassuring to have the Council’s intentions in writing and we are finally able to scotch these rumours of closure once and for all.

“We very much appreciate the positive feedback we have received from the Council with regard to the services we provide for the local area.

“We are now able to plan for the future and we look forward to increasing these services."

We are planning an open day at the Centre in the Autumn, everyone is welcome to come along and help us celebrate the future.”