Autumn Statement - A Letter from the Chancellor


Posted by Gareth Elliott at 01:11 No comments:

Whitton Station Upgrade - OPEN TO ALL

Five million pounds worth of upgrades were officially unveiled at Whitton Station on Friday, the major improvements include a new station building, new bridge, two lifts, refurbished platforms and canopies.

Passengers will find Whitton Station more accessible than ever thanks to the partnership work between Network Rail, Richmond Council and the Department for Transport.  The new station building includes a new ticket office, shops, new fully-accessible toilet, an improved station forecourt and cycle racks. An enormous amount of investment has been made at the station since improvements began in March 2015 and were completed this month.

Whitton Cllr Gareth Elliott said:
"This upgrade is a wonderful addition to Whitton Village bringing provision of access to all - be it the disable, the elderly or parents with young children. With fast access into London our partners at Network Rail, the RFU and the Council have shown a confidence in Whitton as a forward looking dynamic place to live, work and play."

Richmond Council's Cabinet Member for Environment, Business and Community, Cllr Pamela Fleming, said:
"We have worked hard over the years with our partners at Network Rail and the RFU to help make this major £5million improvement programme happen at Whitton Station. The official unveiling of this new, fully accessible footbridge is a proud day for us and marks the completion of the final phase of these upgrades.
"The new bridge provides two lifts for passengers and since the work began in March 2015 our £450k investment alongside a similar amount from the RFU, has helped to provide passengers with refurbished platforms and canopies and a new station building which houses a new ticket office, new retail unit, new accessible toilet and an improved station forecourt and cycle racks.

"Richmond Council has already made a big investment in transforming Whitton High Street through our Uplift Programme which complements the major upgrade work at Whitton Station. We are all very proud of the work that has gone on in Whitton over the years. It will make a big difference to the local community and leave a long-lasting legacy."

Route Managing Director at Network Rail, Becky Lumlock, added:
"Our Railway Upgrade Plan is delivering better stations and better journeys across the region. The £5million that has been invested here will make a real difference to passengers, providing them with a more pleasant and more welcoming station. The number of passengers using the railway is growing at a fantastic rate and by investing in making the railway more accessible we can help to make sure that everyone can take advantage of the improvements we're making."

Posted by Gareth Elliott at 01:06 No comments:

Are You Interested in Representing Whitton - Join the Team for 2018 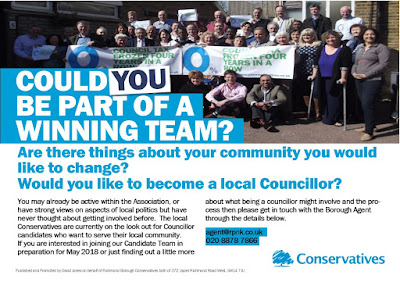 The Twickenham Conservative Association is currently on the lookout for talented individuals with a desire to serve their local community.

Across the Borough of Richmond upon Thames we are seeking to identify committed and passionate individuals with an interest in standing as a local Councillor.

If this is something that appeals to you and you believe you have the time and the capacity to make a real difference then please register your interest with David Jones, the Borough Campaign Agent.

Applicants will be expected to demonstrate a commitment to their local area and the Conservatives, complete an application form and attend an Approvals Committee before applying for seats in their preferred wards. Membership of the Conservative party is mandatory.

It is important that those wishing to nominate expect to meet the strict eligibility requirements before applying:

Being a councillor gives individuals a genuine opportunity to make a difference in our community.  So if you are interested  why don’t you get in touch ASAP.  Applicants will receive lots of support from local MPs, Conservative Group colleagues and the Borough Campaigns Team.

Any further questions or to register an interest should be directed to the Agent on 020 8878 7866 or by email to agent@rpnk.co.uk.

Please Note: If you have previously registered an interest in standing as a Cllr through the Chairman or Deputy Chair Political of Twickenham Association there is no need to re-notify in response to this email as your details have already been passed across.  This email is a final call for anyone wishing to register an interest, but has not yet done so.   The Agent will promulgate details of the application process and timelines to all registered applicants and Branch Chairs later this week.
Posted by Gareth Elliott at 03:37 No comments: