Happy St George's Day. This weekend Whitton once again put on its best outfit and presented itself to the world - and what a show it put on.

This year's St George's Day Parade was one of the best and was the perfect opportunity for Whitton to show off the fruits of its Uplift Strategy and the raft of new shops and opportunities available in our Village.

Cllr Gareth Elliott said:
"As a proud Whittonian, born and bred, the St George's Day is a special day in our community's calendar when everyone from the Village, and from wider afield, can come together and enjoy each other's company. To this day I am still meeting old friends, and even teachers, from primary and secondary school. It just goes to show how enduring Whitton is as a place to live, work and play.

"I would like to congratulate Whitton Business Association on once again putting on a fine event and making Whitton proud." 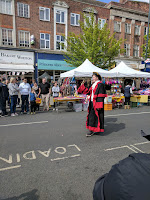 Posted by Gareth Elliott at 08:05 No comments:

Richmond Council has welcomed the allocation from Government which will go some way to helping the authority pay for the school expansion programme in the borough.

The Department for Education has allocated the money to support the provision of new primary school places in areas where they are needed.

“I am delighted with the additional funding we have secured from the Government. Richmond upon Thames has the best primary schools in the country, and therefore demand is very high. Even with rising demand, we have significantly increased the percentage of parents receiving their first preference of school over the last seven years. We have already added 24.5 forms of Reception entry, which equates to over 5,100 permanent primary school places in total.

“We have put in place a school places strategy which, including free schools, will add a new secondary, new special schools and four or five more forms of primary entry over the next 10 years. This money is an important contribution towards paying for that programme, and we will continue to work with the Government to provide even more over time to help ease the strain that is being placed on our local authority finances.”
Posted by Gareth Elliott at 08:20 No comments:

The 53rd Mayor of Richmond upon Thames will be Cllr Lisa Blakemore, it was announced today (March 12).

Cllr Blakemore was first elected as a Councillor for North Richmond in 2010. Since then she was Deputy Mayor between 2012-13, held the title of Tenants Champion (between 2010-15) and since 2015 she has been the Cabinet Member for Housing and Public Health.

She has lived in the borough for ten years. She has always been passionate about improving people’s lives. She trained as a teacher and educational psychologist. Working in the industry for a number of years. Following this, Lisa specialised in autism and published a book in 2001 on the subject. After becoming a councillor she also became involved in a number of local charities and organisations – including Richmond Parish Lands as a Trustee and as a former Governor at Christ’s School.

Cllr Blakemore has one daughter and two grand-daughters – one of which attends a local primary school.

Cllr Blakemore will be formally announced as Mayor for 2017/18 at the Annual Council Meeting on the 16 May 2017. At the meeting she will also announce her Deputy and chosen charity.

She said: “Richmond upon Thames has been my home for more than 10 years and I love it. I have always been compassionate about people’s lives. And through various aspects of my career have been committed to helping people live happily, healthily and safely.
“Becoming Mayor is something I will be very proud of. And, when I have decided on my chosen charity for the year, I will raise as much money as I possibly can for them.”
Posted by Gareth Elliott at 08:19 No comments: