UPDATE: Further Progress on the Duke of Northumberland River Walk

The Duke of Northumberland River is a wonderful hive of activity with all kinds of wildlife and flora and fauna. It is also a fantastic riverside walk but unfortunately, it can be a bit of a challenge to all but the most intrepid.

However, Richmond Council has been installing a new walkway which up to now has only got so far as the Harlequins’ Twickenham Stoop and Warren Road. Once the walk reaches Chase Bridge School and along Twickenham Rugby Stadium it reverts to a wild walkway. This has partly been because of ongoing negotiations between the Council and the RFU and fence lines and nature protection concerns.

Cllr Elliott has been negotiating with the RFU to ask for their fence line to be moved back to install the new walkway and after sustained pressure, it is now on the table. Cllr Elliott met with the RFU’s Community Relations Manager, Chris Donnelly, who has agreed that the rugby union will indeed move the fence back and also work with the Council to enhance the area. Additionally, the RFU has also agreed to create a new nature garden at Chase Bridge School for the children. 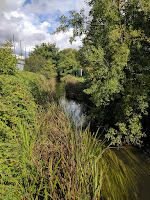 “It is great news that the RFU has agreed to work with the Council to open up this fantastic river walk to the people of Whitton. With the amazing wildlife and flora and fauna, this is a hidden gem in Whitton that I hope people, once the walkway is finished, enjoy and utilise. I look forward to when the works are finished.”
Posted by Gareth Elliott at 06:32