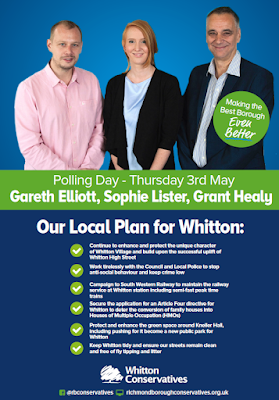 Posted by Gareth Elliott at 07:54 No comments:

Following a recent meeting with the RFU, the Police, Dene Estate residents, Council Officer, and Cllr Grant Healy, regarding illegal traveller encampments on the Rosebine field, the RFU have sent a letter to every household on the estate (see below).

Cllr Healy: “It's extremely encouraging that everyone involved can get together and not only understand the issues but also discuss what can be done practically to address them. Some gaps in intelligence gathering and procedures were discovered at the meeting I participated in, and ways of plugging them agreed. Let’s hope that there are no more such incursions and if there are they are for the briefest time possible.”

As you will be aware, there was recently a second unauthorised encampment on the Rosebine field. The RFU, Richmond Council and the Metropolitan Police have been working together to address this issue and to prevent it from happening again.

On the first occasion last year, bolt cutters were used to open the gates to force entry, on the second occasion; staff were threatened and assaulted as entry was forced. This clearly isn’t something which we want to happen again.

You will know from the behaviour which you have had to witness, that the situation is extremely unpredictable and can become volatile. As soon as the most recent encampment came to the attention of the RFU, we informed the police and Richmond Council, although we needed to wait until the Monday morning to obtain the eviction notice, which was served immediately. That notice was effective, and the field was vacated. The approach of the RFU, Council and Police is designed to prevent any escalation and to persuade the groups to leave as soon as possible. Should the entire legal process have to be followed, the encampment and anti-social behaviour can grow and last for some weeks or months. The timescale for action is:


The experience of the Council is that illegal encampments will usually leave before the clearance work starts.
A meeting was recently held to discuss this and address residents’ concerns at Twickenham Stadium between resident representatives, the RFU, Police, Richmond Council and the Police. The various agencies were able to answer some resident questions which we have had sent to us:


The very nature of breaking onto the land means that none of these measures can 100% guarantee that this will not happen again, but we believe that it reduces the risk considerably, and if it does happen it can be dealt with efficiently and promptly. In addition, you will now be aware of the processes which have to take place and the steps which are taken.

The RFU, Metropolitan Police and Richmond Council are all aware of the impact which these events have on you, and we will continue to monitor the situation and consider new tactics to prevent further reoccurrences.
Yours faithfully

Our Plan to make the Best Borough even Better - Our Manifesto 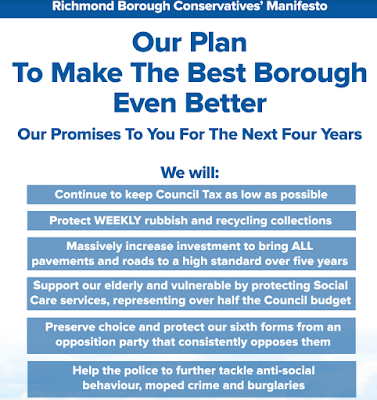 Posted by Gareth Elliott at 06:34 No comments: 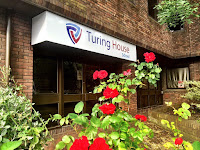 Richmond Council has reported that the Education Skills Funding Agency has finalised the land acquisition from the London Borough of Hounslow for a permanent site for Turing School, in Whitton.

THS has been looking for a permanent site since 2012 and negotiations between the Education Skills Funding Agency (ESFA) and Hounslow Council have taken 18 months. The school’s current site in Queen’s Road, Teddington, is not large enough to be a long-term option.

Following negotiations between the ESFA and Hounslow Council, who own the open space behind Hospital Bridge Road in Whitton, the acquisition is now complete.

Building the school on that site will be subject to planning permission and full community consultation as part of that process. It is expected that the planning application process, including an assessment of traffic implications, will commence in summer 2018.

Subject to planning consent, the new school facilities are likely to be ready for occupation in 2020. However, as the current facilities at Queen’s Road are unable to facilitate a further intake before then, the Council has agreed to offer the use of a nearby school site, Clarendon School, in Hanworth Road, Hampton.

Cllrs Gareth Elliott and Grant Healy and Whitton conservative Candidate Sophie Lister cautiously acknowledge the news that Turing House has made a firm commitment that the school will review their admission policy when their planning application is considered. The school has currently proposed an 80/20 split of intake with the larger number of pupils from its Teddington catchment area. Cllrs Gareth Elliott and Grant Healy have consistently opposed this policy and have raised on many occasions the impact this will have on local traffic and its unfairness to residents.
Posted by Gareth Elliott at 02:10 No comments:

South Western Railway (SWR) has been urged to rethink their proposals following a December 2018 timetable consultation.

The consultation put forward a proposed new timetable. The Council has acknowledged SWR’s aim for a more uniform approach to the timetable, stopping patterns and journey times but has raised concerns about the inconvenience the changes will cause to some of the borough’s residents.

Councillors will outline their concerns at a meeting with SWR in April including:
Cllr Gareth Elliott, Whitton Ward Councillor said:

"Whitton station is a vital transport link to our residents and any change to the timetable to makes access to London and elsewhere longer would impact very negatively. I am encouraged that we have secured a meeting with SWR's Managing Director and I hope to make the case strongly of the concerns of Whitton's residents."

“While we can understand South Western Railway’s desire to create more uniformed timetables, and note that some journey times are shortened, we are concerned that some people in the borough are likely to be adversely affected where the timing of their daily service changes.

“We look forward to a productive discussion with them and hope they will take on board our residents’ concerns when making a final decision on the scheduling of their services
Posted by Gareth Elliott at 05:27 No comments:

Whitton Library is on track to reopen next month following a refurbishment programme that will ensure it is accessible to all.

Since January, the Library has been closed to enable much-needed work to be undertaken on the interior layout and environment of the library. Improvements include roof repairs, ceiling replacement, the installation of new lighting, and a much needed fully accessible entrance door.

The interior has been revitalised with the introduction of new shelving, display units, a study area with computers, comfortable seating and space for activities and events. The children’s area has been given a complete makeover, including a new StoryWall with a cheery woodland theme.

If the works remain on schedule, the library will re-open on Tuesday 4 April 2018.

Cllr David Linnette, Cabinet Member for Culture, Sport and the Voluntary Sector, visited the library yesterday to see the improvement works, he said:

“Our libraries team and contractors have been working around the clock to ensure that these improvements are delivered to time.

“The improved library will provide a well-equipped flexible space which will be suitable for leisure and study purposes as well as a meeting place for the local community.

“One of the most important changes is the new door to the library. Whilst this might seem like a small thing – the door is suitable for those with disabilities to be able to open. This is key in ensuring our libraries are accessible to all.”

“Whitton library is a fantastic asset for the local community and I am delighted to see that our Conservative Council is investing in our local library. I can’t wait to the new look and much improved features.”

Posted by Gareth Elliott at 05:19 No comments:

ACTION ON FLYTIPPING: Clear up at 310 Nelson Road 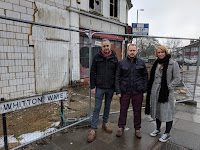 Your Local Conservatives in both Whitton and Heathfield wards have worked together to force the clean-up of the unsightly and potentially unsafe site at 310 Nelson Road since early December. Following strong pressure from Conservative Councillors, the site has now been cleared of waste.

This site has become a blot on the landscape following the departure of Threshers many years ago. Developers have failed to finish building on the site, using loopholes in the planning system to leave it empty and derelict. The result being that the site has become a magnet for illegal fly-typing.

The Conservative run Council issued an 'S215 Untidy Land Notice' Order to the developer, ordering the rubbish to be cleared and the site made safe. Within a couple of days, this was complied with.

Your local team will continue to monitor the activities on the site to ensure that should there be a reoccurrence the swiftest action will be taken. We will be putting pressure on the developer SEP to complete the building works as soon as possible.

We will also support the Council in lobbying the Government to increase its power to force builders and developers to complete projects more speedily rather than just sit on sites. There are already encouraging signs that the Government will bring in measures soon to stop so-called land-banking. 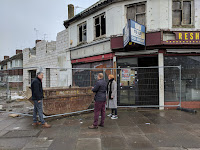 “From first highlighting the escalation of flytipping to the appropriate Council department in early December to reporting the collapse of the barriers in front of the site on 3rd February I have been impressed by the Council’s response (the fence was re-erected the same day as I reported the dangerous incident) to this issue, which is of great local concern."
Posted by Gareth Elliott at 06:11 1 comment: